Partner with us for Press release distribution and get best in class service, guaranteed postings on tier 1 media and maximum reach

The surgery was performed by well-known orthopedic surgeon - Dr. Nilen A. Shah and his team 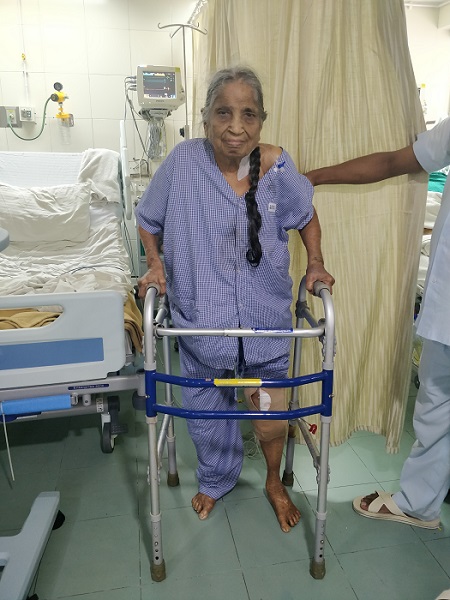 100 Years old Chanchalben Sukhlal Shah after surgery on left side
Mumbai, Maharashtra, India:  When does a person become old? This is a philosophical question and when this question was put to Chanchalben Sukhlal Shah who was born on 17th of Feb. 1919; she said, “When you dwell only in the past - that is old.” She came to meet Dr. Nilen Shah at S. R. Mehta Hospital; 3 weeks ago; limping badly as her knees were hurting. This was the first time Dr. Shah was examining a 100-year-old patient with knee pain, was talking to her and her relatives; explaining that to relieve her pain a knee replacement would be required. Without batting an eyelid, Chanchalben asked when can the surgery be done and whether the doctor would do both the knees together. Dr. Shah had to explain that considering the circumstances, it would be best only to operate on the more painful - the left side.

The left knee replacement surgery on Chanchalben at 100 years was duly carried out at S. R. Mehta Hospital at King’s Circle, Mumbai by Dr. Nilen Shah and his team recently. Obviously, extra precautions were taken to ensure that Chanchalben’s surgery as well her recovery was smooth and painless. She was so happy with the surgery that she was again demanding the other side to be operated as soon as possible but Dr. Shah has insisted that she waits at least for 6 weeks before the other side is operated.

We asked Chanchalben and her family as to why they chose to go in for a knee replacement when she was 100 years old. They replied that the pain was increasing and was making her life miserable. We knew that surgery was the answer. We had complete faith in the doctor and the institute as we knew of several patients operated by him successfully at S. R. Mehta Hospital and when we met Dr. Nilen Shah, we knew that our faith was not misplaced as he talked to us like a friend and guided us in the right direction.

We asked Dr. Nilen Shah as to what the reason for this high rate of success was. Dr. Nilen Shah explained that each operation is a controlled invasion on the body to achieve a specific aim. In Knee replacement, the aim is to remove the diseased parts of the bone and implant a new advanced joint. If the aim could be achieved, with the minimum of invasion on the body, the body would recover very fast and relatively painlessly. Dr. Nilen Shah has been the pioneer of a technique called Minisubvastus approach for Knee Replacements and has close to 10000 knees operated by this method. In this technique, as the muscle is not cut to implant the new knee joint, the recovery is faster, the need for physiotherapy is minimized and most importantly, the pain of the operation is much less. With the availability of new joints, the flexibility of the implant and thereby the knee has also improved. In Chanchalben’s case, the Maxx Freedom Knee was utilized which is a High flex knee, which conserves bone and accommodates high flexion by a unique 7 radius curvature on the femoral implant.

Smt. S.R. Mehta & Sir K. P. Cardiac Institute was started in May 1999 under the Chairmanship of late Shri Manubhai C. Shah, a well -known city industrialist and philanthropist. The idea was to provide a world-class, safe, quality healthcare in cardiology, and cardiac surgery at affordable rates to members of all strata of society. After running the cardiac program successfully for a few years, late Manubhai decided to add Orthopedic services to the Hospital as well. Soon the Orthopedic department and especially the Knee Replacement work at the Hospital which was also focused on quality, safety and affordability, picked up and currently the Hospital caters to more than 2800 coronary angiographies/angioplasties, more than 800 cardiac bypass surgeries and more than 900 knee replacements every year. www.srmkpcardiac.com